By mid-March 1917, as the winter snow melted gradually into spring, the people of Sandpoint opened their weekly newspaper to find a few glimmers of good news. Local barbers reassured customers that the recent 10 cent price increase applied only to shaves; a haircut remained just 35 cents. The threatened railroad strike was avoided when workers got a pay raise, retroactive to January 1. And the Reverend Charles MacCaughey of the Methodist Church defended the community’s reputation, claiming that it was not a bad place. “I have never seen a town of its size,” he said, “where there were more good citizens and God-fearing people than in Sandpoint.”

While the railroad strike was averted, the threat of a major lumber strike still hung over the region. The Industrial Workers of the World (IWW) had been actively organizing in lumber camps throughout North Idaho for the past year, with similar activities throughout the Pacific Northwest. The radical union found support among loggers who worked long hours for little pay, living in remote, often squalid camps for months at a time. In March, officials from the IWW and two other labor organizations agreed to stage a coordinated lumber strike across the Pacific Northwest on July 16.

Wobblies, while not entirely welcome, were generally tolerated in logging towns like Sandpoint in early 1917. The community had filled the Rink Opera House in February to hear Elizabeth Gurley Flynn, the radical Wobby firebrand. One of the local newspapers wrote favorably about the IWW helping a destitute family in need, paying for rent and groceries until the father was able to find work.

The tolerant atmosphere changed suddenly in early April when the United States declared war on Germany and entered the conflict in Europe. Bonner County residents once again packed the Rink Opera House, this time to hear patriotic speeches and learn how they could support the war effort. Citizens bought Liberty bonds and donated money to the Red Cross, while women of the local Red Cross auxiliary prepared supplies for military hospitals. President Woodrow Wilson instituted a nationwide draft and announced that all men aged 21-30 had to register on June 5. Idaho Governor Moses Alexander urged towns to organize a home guard of patriotic citizens to “occasionally march up and down the main streets of the communities in which they live,” carrying American flags, however, instead of rifles.

An undercurrent of coercion lurked behind these patriotic efforts. The draft was, by definition, coercive. Bonner County registered 1,148 men, including 254 immigrants who intended to apply for citizenship. The local press praised men who enlisted in the military and branded any who failed to register for the draft as “slackers.” Donations to the Red Cross were theoretically voluntary but before the end of 1917 the local chapter published a list of those who refused to donate despite having the financial resources to do so. When public schools opened in the fall of 1917, the high school offered French and Spanish classes in place of German, following a nationwide trend to end instruction in the language of an enemy.

Wartime seemed to create a general wariness as well. Frank Yocam noticed a “skulking figure” tacking a small poster up near the Northern Pacific depot in May 1917. He investigated and found a placard that read, “Politicians, capitalists, preachers, newspaper editors and other stay-at-home patriots are never found in the battlefield. Why should workingmen?” Local authorities branded this as treason and began watching for the perpetrator.

It was during this time of intense patriotism that the timber strike was scheduled. Early in the spring, many lumber companies in the Idaho Panhandle wanted to get a sense of just how many IWW members were working in their camps. They asked employees to fill out cards with their personal information, along with an assurance that they were not Wobblies. Angry loggers refused to sign and many walked out instead. Tensions in the region increased in late April after an unknown person shot a soldier guarding a railroad bridge near Spokane, wounding him in the leg. The incident was blamed on Wobblies, and two days later soldiers stormed the IWW hall in Spokane. A riot ensued. Far from the city, short wildcat strikes hit isolated logging camps and river drives. The Inland Northwest was a tinderbox, ready to explode.

The spark came in the afternoon of June 14 when 144 men at Humbird Lumber Company’s Camp 6 laid down their tools and walked off the job. Word of the strike spread like wildfire to other isolated camps and before the end of that day, there were 500 striking Wobblies on the streets of Sandpoint. They laid out the familiar IWW demands: an 8-hour day, instead of the current 10 hours; minimum pay of $60 per month, including board; smaller bunkhouses designed for a maximum of 12 men instead of the current ones which often were large enough for 80, or even as many as 150 men; bathing facilities; and, of course, better food. 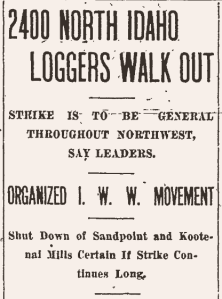 The local newspaper correctly predicted that the strike might “eventually prove to affect the lumber industry of the entire northwest.” In just one week’s time, 2,400 loggers had joined the strike in North Idaho, and it soon engulfed most of the logging camps east of the Cascade Mountains. When workers on the coast joined the strike in mid-July, on the previously scheduled date, logging across the entire Pacific Northwest essentially shut down.

As soon as the scope of the strike became apparent, Humbird Lumber Company turned draft horse teams out to pasture, closed up the camps, and settled in for the long haul. Since the IWW strike affected only logging crews and not the more skilled sawmill workers, company officials were not too worried. They had enough logs in the mill pond to keep both the Sandpoint and Kootenai mills running through most of the summer. Because sawmills were forced to limit production, companies were able to reduce their excess inventory of lumber in their yards and avoid further price reductions.

State and local officials reacted with concern as the IWW strike neared the end of its first month. Governor Alexander came to Coeur d’Alene in early July to assess the situation personally, and he remained until the end of the month to meet with local officials, owners of lumber companies, and members of the IWW. He spent an hour and a half at the IWW hall in Sandpoint, in the basement of the Abbott building, talking with the men there and gathering copies of their literature. The governor kept his sense of humor during the verbal exchange, listening to the men while dispensing advice about their activities. He noted that although it was illegal to hand out revolutionary literature, picket, or commit sabotage, he believed they had the right to strike. Furthermore, Alexander had become so concerned about the poor living conditions in camps that he had directed state health officials to investigate. He warned an incoming state official not to give the owners of lumber companies “any more of the deal than you give the poor devil with overalls on.” Then Alexander observed, “The timber companies were too fast for me.”

Throughout the strike, Governor Alexander resisted calls to bring in federal troops, preferring instead to use recently passed Idaho laws aimed at the IWW. Local officials took a more confrontational approach. A few days before the governor came to Sandpoint, Bonner County Sheriff Remer went to the IWW hall with newspaper reporters, other county officials, and three American flags. In what seemed like a deliberate provocation, the sheriff asked the IWW men gathered to hang one of the flags outside the entrance “so we will know where you are at.” The other two flags were hung on the walls, and the Wobblies promised their visitors that the flags would be treated with respect.

Just a few days after Governor Alexander’s visit, however, the sheriff returned to the IWW hall to close it down, claiming that it was violating state laws. After hours of discussion with members, the local IWW voted to close only under protest.

The sheriff tightened his grip on the Wobblies in late August by arresting three local leaders under Idaho’s criminal syndicalism law against advocating “crime, sabotage, violence, or other unlawful methods of terrorism as a means of accomplishing industrial or political reform.” A search warrant helped turn up IWW literature at the Wisconsin Hotel during the arrest of John Wright, former secretary of the local IWW, and William Deneke, an active member. The third man, John Currie, was arrested for picketing. Similar arrests across the Panhandle put hundreds of men in jail. The jail in St. Maries became so crowded that officials had to build a stockade to hold the overflow of Wobblies awaiting trial.

By late August, regional lumbermen began expressing interest in settling the strike. At a meeting in Seattle, they stressed the importance of getting the mills running again to serve the war effort and asked loggers return to work on a 10-hour day to finish important government contracts. Once these were fulfilled, the owners promised that employees could vote to continue on either a 10-hour or 8-hour basis.

Although this offer was a non-starter, both sides in the Inland Northwest were fatigued by early September. Striking workers, who had been without pay all summer, met in Spokane at the Finlanders Hall and voted to return to work on September 10. Lumber company owners met at the Loggers’ Club in Spokane to discuss their proposal. Company owners across the Pacific Northwest agreed to support an 8-hour day but said that it wouldn’t go into effect until this became an industry standard nationwide. To reach this goal, they agreed to push for congressional action to mandate an 8-hour day for all logging and lumber mill workers. Equally important, regional operators voted to standardize the design of logging camps to include well lighted and ventilated quarters with showers.

Striking loggers began straggling back to distant camps, carrying small packs with clothes, bedroll, and tools. When asked about membership in the IWW, the men all denied belonging to the union even though many were well known Wobblies. For their part the companies, desperate to restart their operations, accepted the denials and offered work to all who came. By the end of September, F.C. Culver of Sandpoint Lumber & Pole Company told the local newspaper, “Our camps are filled, our mill is running and we are happy.”

Culver’s celebration might have been premature. Yes, loggers were back at work, sawmills were turning out boards once again, but many issues remained unresolved. And the Wobblies were not yet ready to give up their fight.

This is the second of  three blogs on the lumber strike of 1917. I hope to have the final installment by early fall.