The telephone rang in the Humbird Lumber Company offices on the mid-morning of November 7, 1918, bringing the unexpected but joyful news that Germany had signed the armistice agreement with the Allies. Word spread fast as the raucous sounds of sawmill whistles, fire bells, and car horns filled the air. The Great War was over at last!

Towns and cities across the nation celebrated the Allied victory that day. In Sandpoint, businesses closed and residents poured into the downtown area. People decorated their cars for an impromptu parade, honking horns loudly as onlookers waved flags. The city’s fire trucks joined in and soon the parade had massed to two blocks long, moving noisily along Cedar Street and First Avenue. “Bedlam broke loose,” noted the local newspaper. “Staid old business men hopped upon motor trucks and blew whistles, threw confetti and yelled themselves into [a] state of hoarseness which will take days to mend.”

Alas, the celebratory spirit was dampened by evening when news arrived that the armistice had not yet been signed. In fact, the German delegation had not even been given the terms of agreement. Evidently the misinformation had been spread by an unconfirmed story from United Press. Nonetheless, local residents went to bed that night happy to have had an excuse to celebrate.

Less than a week later, Sandpoint, the nation, and indeed the whole world, had reason to cheer when the armistice was signed in France on the 11th hour of the 11th day of the 11th month. The news arrived in Sandpoint just after midnight on November 11, prompting a few blasts of the fire whistle to let residents know. Another celebration began at daylight, with more whistles and horns making sure that everyone knew that “Germany had really acknowledged defeat, and no mistake this time.” The crowds downtown swelled as hundreds of people poured in from neighboring towns and nearby logging camps for a celebration that lasted well into the night.

In anticipation of this news, city officials and a group of citizens had organized a more formal program to commemorate the end of fighting. In the morning, a nine-piece band led the parade of cars decorated with American flags as well as the flags of all of the Allied nations. A large truck was parked at the intersection of Second Avenue and Main Street to make a platform which not only held the speakers but also several veterans of the Civil War. The formal program continued with speeches, patriotic songs, and band numbers. By evening, a large bonfire was burning on a vacant lot at Cedar and Second where an orchestra provided music for a street dance.

Nobody seemed to mind that Sandpoint had celebrated the end of the Great War twice in less than a week. As one local newspaper noted, the first celebration “was of hilarious joy, the last of a more sensible appreciation of the tremendous meaning of the occasion.”

The November 11 armistice ended the bloody fighting that had ravaged Europe for more than four years. The losses from this conflict are almost incomprehensible today: an estimated 9 million combatants and 7 million civilians killed, with an additional 23 million soldiers and an unknown number of civilians left wounded.

American casualties were considerably lower than other Allied countries since the United States did not enter the fighting until April 1917. Nonetheless, the approximately 117,000 soldiers who died came from every state, spreading the pain—and pride—nationwide, including right here in Bonner County.

William D. Martin was the first Bonner County man to die in the war, killed in France on July 26, 1918. He was also the first in his regiment to die and all of his comrades gathered as he was buried on a hillside in France. His parents did not receive word of his death until nearly two months later when an official letter finally reached them. The chaplain of the 146th Field Artillery said that their son had died a hero. According to his letter, Martin’s last words were, “I am dying. Take care of the other fellow.” The local Presbyterian Church overflowed with mourners at a memorial service for the young soldier from Sandpoint.

While Martin was the first to die, others soon followed. The plaque at War Memorial Field on Ontario Street in the south part of Sandpoint lists just twelve names of Bonner County soldiers who died during World War I. I thought it would be an easy task to track these men down in the newspapers from 1918 to learn a bit more about them and where they died. Little did I know!

Using the old Bonner County newspapers, lists of war dead compiled by the Adjutant General’s Office in 1920, and a three-volume set of American casualties, also compiled in 1920, my list grew considerably.

Official lists separated the dead into three primary categories: those killed in action, those who died later of wounds, and those who died from disease or accident while serving overseas. I soon found that the names on the monument also included young men who had died of disease or some other medical crisis while enlisted in the military but still living in the United States. This category was disproportionately large since the autumn of 1918 coincided with the terrible influenza pandemic which erupted toward the end of the war, killing an estimated 50 million people worldwide.

Using these same categories, I have updated the list of Bonner County men who died while serving in the military during World War I. Please note that some of the names are spelled differently on the monument; I took the spelling that was used most often in my sources. Another caveat: I do not consider this list to be absolutely accurate. Please feel free to send me additions and/or corrections.

Died of disease while enrolled in Student Army Training Corps at college/university or during military training in the US:

Died of unknown causes while in the military during years of World War I:
—Dan Yee Jay, Sandpoint
—Harry D. Martell, Clark Fork

Died of disease while serving as Red Cross nurse in US:
—Mary O’Brien, Kootenai 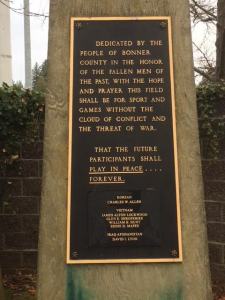 Thus the list of twelve names on the monument at War Memorial Field has grown to thirty-three, magnifying the losses felt by the families and friends left behind in Bonner County in 1918. The names from subsequent wars have mushroomed as well, now spilling over to a second monument which lists those lost in Korea, Vietnam, and Iraq/Afghanistan. The names are prefaced with a dedication to “the people of Bonner County in the honor of the fallen men of the past, with the hope and prayer this field shall be for sport and games without the cloud of conflict and the threat of war, that the future participants shall play in peace forever.”

I, too, pray that this will come true.

2 Responses to November 1918: Celebration and Sorrow