Abbott Building on the corner of First Avenue and Bridge Street, Sandpoint, March 2017.

Two buildings went up in smoke on that cold winter night. Working under difficult conditions, fire fighters managed to keep the flames from reaching a neighboring building but they were unable to save the two structures. By morning, the ruins still smoldered at the corner of First Avenue and Bridge Street.

While eerily similar, this was not the recent fire on February 11 that destroyed five businesses on that same corner. Instead, the fire broke out early in the morning of March 18,1912. It spread quickly in the wooden buildings and consumed the California poolroom and lodging house as well as the Sandpoint Hotel, cafe, and poolroom. An earlier fire on January 22 had destroyed four buildings in the same block of First Avenue, including C.F. Moody’s feed store, the Idaho rooming house, Silver Club Cafe, Denver Barber Shop, Eagle rooming house, Eagle soft drink parlor, Doyle’s clothing store, and George M. Walker’s clothing store.

Although the Sandpoint Hotel building was owned by Ignatz Weil, it had long been the home of William Abbott’s saloon. Abbott, better known as Billy, was a well known businessman in Sandpoint. He was in his early thirties when he came to town around 1903. Within a short time, Billy joined forces with Mr. Branson to open a restaurant and saloon in the recently completed Sandpoint Hotel. 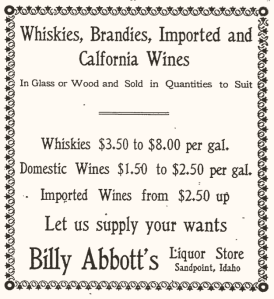 Although the firm of Abbott & Branson failed by early 1905, Abbott continued the business on his own. He occasionally got creative with his advertising. For instance, in late 1905 he installed an outdoor sign depicting a camel carrying a jug of whiskey, standing in front of pyramids. “A camel can go eight days without drinking,” the sign read, “but who wants to be a camel?”

Billy clearly was a popular man about Sandpoint. When he returned from a trip in September 1907 with his bride, Helena, friends gave them an enthusiastic reception and the local band serenaded them at the Sandpoint Hotel well into the night. It didn’t hurt Billy’s popularity when he dusted the cobwebs off several old bottles of liquor that had been stored in his cellar and generously shared them with the well-wishers.

Portion of Sanborn Fire Map from January 1909 showing the east side of First Avenue between Main and Bridge Street. Note the 8 saloons (designated Sal. on the map) in just one block. Abbott’s was the one on the corner of First and Bridge.

Despite his success and popularity, it wasn’t a smooth road for Billy Abbott. During the early 1900s, moral crusaders throughout the nation, including Sandpoint, targeted saloons and their associated vices of gambling and prostitution. Abbott was one of several local saloon operators accused of running gambling establishments, first in 1903 and again in 1908; they were acquitted both times.

It was harder to counter the forces pushing for prohibition. In a hotly debated special election in May 1910, Bonner County voters approved a local option to end the sale of alcoholic beverages. Although Sandpoint voted 729 to 654 to remain “wet,” the final tally was 2,168 “dry” to 1,832 “wet.” (At that time, Bonner County included all of what is now Boundary County.) Before the new law went into effect on August 23, 1910, Billy Abbott held a sale on the remainder of his booze.

This law, of course, did not end the sale and consumption of illicit alcohol. Just two years later residents revoked the local option, voting 2,092 “wet” to 1,511 “dry” to end Bonner County’s first experiment with prohibition.

The timing was perfect for Billy Abbott’s plans. The two fires during the winter of 1912 had left a large gap on the east side of First Avenue between Church and Bridge Streets. Abbott began making plans to buy several of the lots so he could build a large brick building. There was one catch, however: he needed to be assured of a liquor license. With a limit of just six licenses in Sandpoint, down from twenty-one just two years earlier, competition was stiff. The city council granted five in late June, with the sixth to be given either to Abbott or Chris Peterson. At first it looked like Peterson would win but then Abbott’s supporters argued that he had purchased the lots on First Avenue with the assurance that he would be granted a liquor license. By late July 1912, the city council approved Abbott’s license.

As soon as he got the good news, Billy Abbott announced plans to build a large brick building on the corner of First and Bridge. Local architect S. Willis Foster designed the building with a full basement and three storefronts on the First Avenue level. The corner space was to be Abbott’s new saloon, with the other two spaces a restaurant and a movie theater. Work continued into 1913.

The new saloon held its grand opening on February 1, showing off the barrels of wines and liquors along the north wall, opposite the forty-foot oak bar that was salvaged and refurbished from the fire. There was a well-stocked wine cellar in the basement. Shortly after Abbott opened his saloon, a restaurant opened in the center portion of the new building. It was followed by the Gem Theater’s grand opening in March when throngs of patrons lined up to see the two-reel thriller, “The Vengeance of Durand,” along with a shorter comedy.

Billy Abbott had just a short run in his new saloon. Idaho voters decided to institute statewide prohibition starting the first day of 1916. Facing the inevitable, Abbott posted a sign in the window of his bar reading, “Don’t ask us what we’re going to do after January 1; what in —— are you going to do?” Less than two months later, Abbott sold his local holdings and moved to Astoria, Oregon, to run another movie theater. Nationwide prohibition was in effect from 1920-1933.

Remains of Abbott building after the fire on 11 February 2019.

Billy Abbott’s building has seen many different businesses over the last century, but the ones that matter the most right now are those that were destroyed in the recent February 11 blaze. The flames on that cold winter night burned Headlines Salon and The Hound Pizza, both in the former Abbott saloon; Sandpoint Chocolate Bear, in the former Grill Restaurant; China Kitchen, in the former Gem Theater; and Sandpoint Tattoo and Body Piercing, downstairs in the Abbott building.

While the Abbott building is now gone, we’re all waiting to see what takes its place, continuing the rich history on that busy corner of Sandpoint.