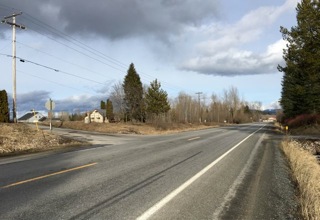 You’ve probably driven past this intersection many times without a second thought. It’s located about five miles east of Sandpoint where Shingle Mill Road joins Highway 200. It’s usually a pretty quiet spot today, but more than once in the past, this place was hopping. And it was Dr. Hendryx who laid the foundation for the boom times from 1885-1892.

When we last left Dr. Wilbur A. Hendryx, he was heading east to set up a new corporation to finance the development of the Blue Bell Mine in British Columbia. He and his brother, Andrew B. Hendryx, joined with E. W. Herrick of Minneapolis and Charles E. Bristol of Ansonia, Connecticut, to form the Kootenay Mining & Smelting Company (KM&S) in late 1884. Dr. Hendryx became the general manager and he was the company’s sole representative in Idaho and British Columbia. In addition to developing the mine, he set about improving transportation and establishing a supply point.

A centuries-old trail ran from this point, known as Mud Slough, north to the Kootenai River near present-day Bonners Ferry. After the Northern Pacific Railroad completed its line across the Idaho Panhandle in 1882, this became a logical place for a station to unload passengers and freight bound for points north.

Robert E. Sproule, the discoverer of the Blue Bell Mine, was quick to see the potential for an improved transportation route to connect his mining interests in Canada with the new railroad in Idaho. He applied for a franchise to upgrade the trail into a toll road, and the Kootenai County* commissioners granted his petition in July 1883. Probably before any road work was done, Sproule sold this franchise to Hendryx in the fall of 1884 and Hendryx, in turn, transferred ownership to the KM&S.

The company completed the road in 1885, allowing wagons to haul goods from the railroad to Bonners Ferry. The county commissioners finally agreed to purchase the toll road from KM&S in April 1889, turning it into a county road and ending years of complaints from residents of the Kootenai Valley. KM&S had two steamboats operating on the Kootenai River to carry freight and passengers from Bonners Ferry to the mines at Kootenay Lake in British Columbia. 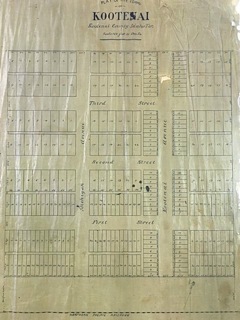 In conjunction with this important road, Hendryx laid out a new town of Kootenai on the flat land above Mud Slough. The plat (shown at  right), submitted to the county in June 1885, showed a neat grid of streets, with First, Second, and Third Streets running parallel to the Northern Pacific tracks and intersecting Kootenai and Michigan Avenues. Most of this was just a paper dream, however, and a later map (see below) showed most buildings clustered along Kootenai and Railroad Avenues.

During the summer and fall of 1885, Hendryx had crews clearing trees and milling lumber with a portable sawmill. They constructed a number of buildings in the townsite, many of them designed to serve the needs of KM&S. By the following June, the new town included a depot, post office, hotel, and store, in addition to the company’s warehouse, blacksmith shop, assay office, stables, and equipment sheds.

While Kootenai got its start by connecting a mining district in British Columbia with the Northern Pacific in Idaho, it took a second railroad to make the little town boom. The Great Northern Railway Co. announced plans in 1889 to extend its existing tracks from mid-Montana all the way to the coast, following the Kootenai River as far as Bonners Ferry before heading south to Sandpoint. Since the town of Kootenai on the Northern Pacific provided an existing railroad connection, it was logical that it would become the primary supply point once construction crews began building the new rail line through Idaho.

Things began picking up by early 1890 as entrepreneurs anticipated the start of construction. James Dolan opened the Miners and Traders Bank in Kootenai in December 1889 and one month later the town had a newspaper reporter. Despite its still-small size, the outlook for Kootenai looked more promising than nearby Sandpoint, and the newspaper suggested in February 1890 that Sandpoint might become a suburb of Kootenai.

The real boom hit in 1891 when thousands of men descended on the Idaho Panhandle to work on the giant construction project. Equipment and supplies for 150 miles of railroad work arrived in Kootenai, to be unloaded from freight cars parked on two long sidings. The Kootenai depot recorded $35,000 in business in just over three months, from April to mid-July. During the same time, crews unloaded supplies from close to 300 Northern Pacific freight cars and loaded nearly 250 cars with outgoing freight including railroad ties, bridge timbers, and telegraph poles. Teamsters headed north on the former toll road, hauling freight wagons loaded with everything from bacon and beans to railroad spikes and dynamite. 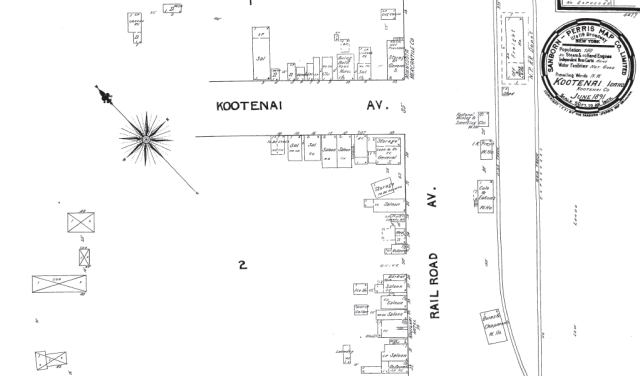 During this time, Kootenai’s population grew rapidly. While the key for the above map shows the population in June 1891 at 150, the newspaper reported 500 people there by mid-July 1891. Most were single males whose paychecks supported an incredible number of saloons. A close look at the above map shows twelve saloons, three restaurants, and two hotels, along with several stores, a laundry, and a barber. Some of the business people probably lived in their commercial buildings since the map shows only fifteen dwellings (indicated on the map by the letter D). 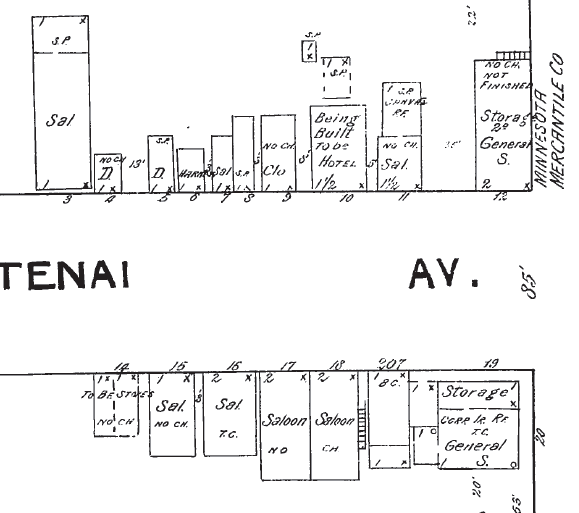 Detail of the above map.

Railroad contractors kept up a brutal pace of construction during the fall of 1891 and Kootenai continued to boom as supplies poured in. Saloon keepers were raking in the money, likely knowing full well that the boom times could not last. For instance, the Kootenai Resort offered nightly music and dancing along with an extensive stock of liquors and cigars.  Billey and Charley’s Resort had similar offerings, while the nearby Palace Theater featured a variety troupe nightly. When two more bars opened in October 1891, the newspaper commented, “Kootenai is bound to see good times this fall.” 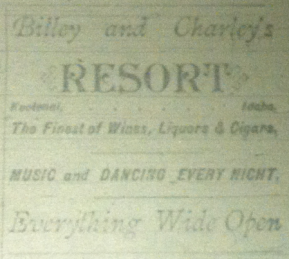 The good times did not last long, however, and it was all over by early 1892. The Great Northern construction moved westward from Sandpoint toward Priest River, and those towns benefited at the expense of Kootenai. A Sandpoint newspaper, perhaps biased in its reporting, printed an obituary in March 1892: “Died – In the county of Kootenai and the state of Idaho, the village of Kootenai,” the announcement read. “It lived and died a natural death. Funeral will take place during March. Friends of the deceased are all invited.” Two surveyors with the General Land Office confirmed these observations later that year, noting that the town’s population had dropped from several hundred to no more than 75. Three years later, the post office was abandoned and most of the buildings torn down for the lumber. 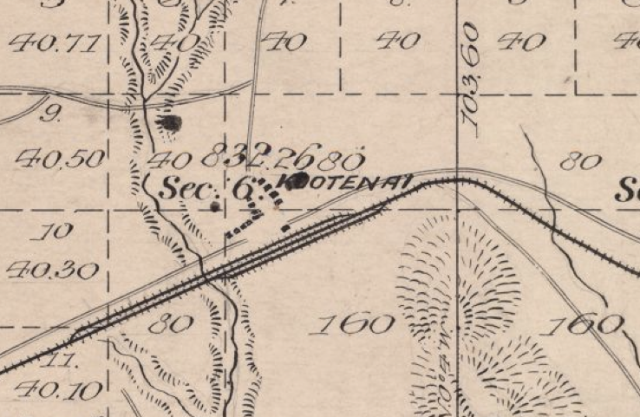 The final blow came in May 1896 when a fire started in a vacant building and burned most of what remained of Kootenai. One of the few houses spared was Dr. Hendryx’s former home, located across the tracks from the rest of town. It was then occupied by Alfred Boyer who lived there for so many years that Mud Slough became known as Boyer Slough and a new post office also took the Boyer name. As memories of the short-lived but lively town of Kootenai faded, a new community coalesced a few miles west to support the new Kootenai Bay Lumber Company. The new town took the Kootenai name and it remains there today.

While it might seem that Dr. Hendryx had left the area long before, that was not the case. He likely spent a good deal of his time at the Blue Bell Mine on Kootenay Lake during the late 1880s, but Hendryx was still well known in this area. As Idaho approached statehood, counties around the large territory designated representatives to the Constitutional Convention, to be held in Boise in July 1889. Dr. Wilbur A. Hendryx was one of three men selected to represent Kootenai County. Henry Melder attended the entire convention, Albert Hagan arrived in time to make a significant contribution to the proceedings, but Dr. Hendryx was not to be seen. Instead of heading south to Boise to represent his county, he went north to Kootenay Lake to deal with his mining operations. The local newspaper railed against Hendryx for failing his duty, but it is doubtful that his business suffered. Hendryx remained involved in the Blue Bell Mine during the early 1890s. KM&S constructed a mill and smelter at Pilot Bay on Kootenay Lake in 1895 but it had limited success and was in receivership by 1899.

Hendryx returned to his practice of medicine, at least intermittently. He was living in Los Angeles by 1895 and was listed as married in the 1900 census. He was connected with the Hendryx Electro Cyanide Company in Denver in 1905 and the Hendryx Cyanide Machinery Company in New York from 1914-1917. He died in 1918 and was buried in New York City.

Both Dr. Hendryx and the original location of Kootenai are all but forgotten. Give them a nod of acknowledgement next time you pass Shingle Mill Road.

* Kootenai County initially encompassed most of North Idaho, including what are now Kootenai, Benewah, Bonner, and Boundary Counties.