Women skating circa 1905. Library of Congress website reference cited below.

A roller skating fad swept the nation in the early 1900s, starting in eastern cities in 1905 and working its way to the west coast a year later. Seattle had three skating rinks by September 1906 and a fourth one was due to open later that month. The sport’s popularity had definite health benefits but it also was just plain fun. 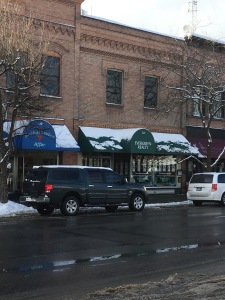 The Princess skating rink operated briefly on the second floor of the Star Market, where Evergreen Realty is today.

Sandpoint residents caught the skating bug when the Princess rink opened in the large room above the Star Market on First Avenue in early February 1907. It operated afternoons and evenings, and “ladies and children especially” were encouraged to skate at the earlier time. Admission was 10 cents and skate rental another 25 cents. Alas, the Princess had a short life —just two weeks, in fact. D.G. Lorenzi, owner of the neighboring building, got an injunction to stop the skating, declaring it a nuisance and damaging to his interests as a landlord. The district court eventually ruled in his favor, long after the Princess came to an end.

The same day that the newspaper noted the closure of the Princess rink, three well known businessmen (Thomas Martin, C.A. Olson, and J.H.C. Scurlock) announced their plans to build a large amusement center that would host roller skating, theatrical productions, and dances. Plans called for a frame building measuring 60 x 142, fronting on Church Street and extending to the alley at the rear. It was located just west of Second Avenue, approximately where the west half of the Kochava building is today.

The Rink Opera House on Church Street stood approximately where the right half of this building is today.

Close to 800 people turned out for the gala opening of the new Rink Opera House on June 12, 1907. The hall was decorated with American flags and the five-piece Tucker orchestra provided music for the dance, hosted by the Eagles Lodge. Happy couples stayed until nearly 3 in the morning, fueled by the lemonade, cake, and ice cream served in the refreshment room. 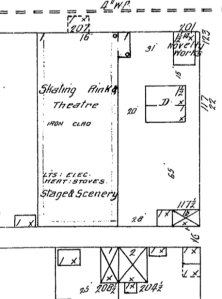 Rink Opera House as shown on Sanborn map from January 1909.

Roller skating became a seasonal activity at the Rink, popular during the fall, winter, and early spring. The management usually announced the season opening in mid-September, often noting that the skates had all been repaired and were ready for the season. Once in a while the Rink hosted special skating events such as the masquerade skating carnival in December 1911 when 200 people wore fanciful and comic costumes while circling the rink. Not long after that, Claude Langworth and Aubrey Finley competed in three heats to be the champion racer in Sandpoint. Langworth was declared the winner when Finley lost a skate in the twelfth lap of the final three-mile race.

With the advent of warm weather in the spring, skates were once again put away and replaced with a regular schedule of summer dances on Saturday nights. Other more formal dances were held throughout the year as well, usually sponsored by a community organization. For instance, the local Company A of the Idaho National Guard put on two dances over the Christmas holidays in 1911, with music provided by the Apollo Orchestra. The Rink military band, the “newest thing in musical wonders,” played for a dance in January 1908. The local newspaper noted that it was “a little bit loud but the time is absolutely perfect.”

The Rink Opera House was used for much more than skating and dances, however. The 24×42 foot stage, with drop curtains, scenery, and four dressing rooms, provided space for touring vaudeville companies. Sandpoint’s location along three rail lines (two transcontinental and one regional) enabled the Rink management to book occasional touring vaudeville acts. Small venues like the Rink joined together in theatrical circuits to increase their clout with national touring companies. During the early part of the twentieth century, theaters throughout the Pacific Northwest worked with John Cort of Seattle who was affiliated with the New York booking agency of Klaw and Erlanger. The Rink had its new curtains and scenery, with artwork done by the Twin City Scenic Company of St. Paul, all ready for its first play, “The Black Hand,” which debuted on October 3, 1907. Later that month, a local production of “The Texas Steer” pleased the audience with “a very creditable” performance while raising money for the public school library. Such amateur plays proved popular over the years.

There were frequent musical events at the Rink that brought a wide variety of music to Sandpoint patrons. The Kellogg-Haines Singing Party performed in October 1907, with a variety of musical numbers including scenes from the light opera, “Dolly Varden.” A group of African American musicians, known as the Tennessee Jubilee Singers, combined humor with music to entertain the Rink audience in April 1908. Another time Swiss bell ringers demonstrated their skills with 120 Swiss bells, 64 musical glasses, 24 musical rattles, 81 triple-toned aluminum chimes, a silver quintette, a 5-octave steel marimbaphone, and more. (Phew!)

The Rink also provided a venue for a lectures and talks on wide ranging topics. Dr. Bancroft promised to scientifically explain various supernatural phenomena based on his interviews with “numerous spirits, spooks and phantasms.” The newspaper suggested, “Bring your rabbit’s foot.” A debate over prohibition drew raucous crowds in the saloon-heavy town in 1910. Henry George, Jr., was scheduled to speak on his theories of land taxation in March 1911 but did not make his appointment because his train was late; it is not known how many people had shown up at the Rink to hear him. Booker T. Washington, on the other hand, drew a large audience in March 1913 when he told the story of the famed Tuskegee Institute.

The Rink Opera House hosted numerous political speakers as well over the years. Former President Theodore Roosevelt packed the hall in 1911 and entertained the crowd with tales of his early experiences in North Idaho. Both Republican and Democratic speakers rallied supporters at the Rink from time to time, and Socialist orators proved very popular as well. When the Industrial Workers of the World (IWW) pushed to organize lumber workers around 1917, the fiery IWW speaker Elizabeth Gurley Flynn drew nearly 800 people to the Rink where she spoke passionately about labor issues. Just a month later, the Rink filled to overflowing with citizens who turned out to demonstrate their patriotism after the United States entered the war against Germany.

While musical and dramatic productions drew many Sandpoint citizens to the Rink, others came to watch a variety of sporting events like wrestling and boxing matches. One such match, between boxers Tim Hurley and Ed Cuff, did not end well when the crowd and referee recognized the fight as “a pure and unadulterated fake.” It was called after four rounds and the Rink refunded the ticket price.

Probably the most popular sport nationwide in the early twentieth century was baseball and Sandpoint was no exception. It was, however, a seasonal sport — that is, until the Rink opened its space to indoor baseball in 1915. Local men formed four teams, selected captains, and worked out a schedule of two games to be played every Sunday. They followed the rules established by large indoor leagues in eastern cities which called for a second shortstop to make ten players on each team. They also used a large soft ball and smaller bat to accommodate the restrictions of the indoor space. The men had to learn to adjust to the limited space, especially as the ball rebounded unexpectedly from the large rafters. The newspaper suggested that the low ceiling in the Rink accounted for larger than expected scores. The indoor league played again in 1916 but apparently stopped the following year.

Things were changing at the Rink by 1917. The skating fad had diminished, young men were leaving town to join the military, and the lumber industry was hit with a massive strike that paralyzed mills throughout the Northwest. Probably the biggest factor in its decline was competition from the two other theaters in Sandpoint which showed movies. In June 1917, the Rink’s manager asked the city council for permission to open a movie theater in the building, repeating his request from a year earlier. Evidently the council finally approved of the change.

Despite the implication that movies would be a new feature for the business, the Rink had been showing occasional moving pictures since 1908. That year, the management marked the opening of skating season in September with an hour of movies preceding the skating. The Rink offered two nights of cameraphone pictures in April 1910, “pictures that talk, sing and act.” Billed as the first of its kind showing in Sandpoint, patrons were treated to David Warfield in “The Music Master” and “Dr. Jekyll and Mr. Hyde.” A few years later, the Hewitt Moving Picture Company played to large audiences in April 1913 with films on a variety of subjects including the ever-popular Buffalo Bill.

After these early forays into moving pictures, the old Rink was totally remodeled and transformed into the Liberty Theater in the summer of 1917. Seven boxes, fitted with comfortable rocking chairs, were built in the former gallery. New equipment promised patrons that movies would be seen without the flickering that was common during that period. The theater planned to show movies regularly, with occasional dances or “first-class road shows.” The grand opening of the Liberty featured the film, “The Last Man,” starring Mary Anderson.

Even this transformation could not save the Rink. The theater began losing money by at least 1917 and later was mortgaged. Then an early morning fire in mid-September 1922 spread from the frame building on the corner of Second and Church (the former Northwest Business College) to a nearby house, sheds, and the Liberty Theater. Despite the best efforts of the fire department, the buildings were a total loss. Owners of the Liberty estimated their loss at $13,000, with just $5,000 covered by insurance.

No trace remains of the once grand Rink Opera House where events entertained the people of Sandpoint for fifteen years. Today’s venues are larger and grander, from the 1927 Panida Theater to the open air Festival at Sandpoint. Despite the change in look and scale, the spirit and intention of the Rink Opera House remain, bringing people together through the arts.

Note: It’s true: Great minds think alike. When I started researching this post in December, I had no idea that Cameron Murray, curator at the Bonner County Historical Society, was also gathering information on the Rink Opera House. I tip my hat to Cameron for her good article on the Rink, recently published in the Co-Op Country Round Up newspaper. The museum is planning its annual History Mystery fundraiser, “A Vaudeville Review,” based on the Rink. If you want a good time, plan to attend on February 25. Call the museum at 263-2344 for more information.

2 Responses to Entertaining Sandpoint: From Roller Skates to Moving Pictures