A Little Extra Help for the Holiday Season

When I went to the grocery store recently, I was greeted by a group of volunteers collecting food for our local food bank. Like many others in Yokes that day, I added a few things to my cart to deposit at the front door when I left. This is all part of a long tradition of giving here in North Idaho. We collect money for Toys for Tots, canned goods for the various food banks, and coats to give to children in need.

I don’t know when this started in an organized way, but I suspect that people have been giving to others for longer than anyone can count. A little research shows that even in the dark days of the 1930s, local people worked hard to make sure that no needy family went without at least some gifts at Christmas.

The stock market crash in late October 1929 caused financial ruin for many investors and a sharp economic downturn for the country. Despite President Herbert Hoover’s efforts to stimulate the flagging economy and stem rising unemployment, things went from bad to worse. Nationwide unemployment rose from 3.2 percent in 1929 to almost 16 percent two years later. By the time Franklin D. Roosevelt was inaugurated in 1933, unemployment peaked at nearly 25 percent.

Here in North Idaho, Humbird Lumber Company, the largest employer in Bonner County, began cutting losses. It closed the sawmill in Kootenai in August 1930, the Newport/Oldtown mill a year later, and most of the operations at the huge Sandpoint sawmill by the end of 1931.  Hundreds of loggers, millworkers, and support staff were out of work.

Various organizations spearheaded local relief efforts in late 1930. The Chamber of Commerce offered to register unemployed people looking for work, promising to divide up available jobs among those needing help. The list grew to 81 names by early December and reached 90 a week later. Jobs were scarce, with just 11 men finding permanent work in the woods while others found only temporary jobs.

Members of two local clubs, Onward Sandpoint and Good Fellows, worked with the Chamber to identify needy families. In late November 1930, the Good Fellows launched a citywide drive to collect food, clothing, and bedding. Two days before Thanksgiving, the men canvased the community and found a “hearty” response, with everything from food and clothing to fuel and cash. Two local companies donated space in their refrigerated plants to store perishable foods. Local hunters donated game and a dairy products company promised 200 gallons of buttermilk each week, asking only that individuals bring containers. The Good Fellows were able to provide assistance to 40 families over Thanksgiving but reported that much more was needed.

With Christmas rapidly approaching, and looking rather bleak for so many, the Chamber of Commerce erected a community Christmas tree at the corner of First and Cedar, lighting it every night before Christmas. Additional decorations included “ropes” or swags of cedar boughs and lighted decorations at intersections. Unemployed men were given work collecting trees and branches to help make the downtown festive.

As the holiday plans proceeded, the Good Fellows realized a growing need for money as more families applied for assistance. Onward Sandpoint put on a benefit program December 16 featuring Mme. Bouley and “a peppy, beautiful group of dancers, all professionals,” who promised to amaze the patrons of the club with their “terpsichorean ability.” Two hundred people attended, pronounced it “the social success of the year,” and raised $100 for charity.

Sandpoint residents in 1930 also helped Santa bring presents to local children. Members of the Elks Club gave out candy and oranges to the kids who came to the Christmas Eve carol sing around the community tree. Over at the fire station, Chief Walter Keuhl had been repairing donated toys to put them in shape to give to children whose parents were unable to afford such gifts. 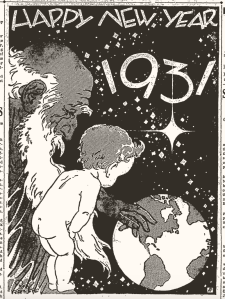 A year later, in 1931, the economic outlook was bleak but, once again, local citizens rallied to help needy families. Sandpoint firemen spearheaded the drive to gather used toys and food for those in need. They repaired the toys to “pristine newness” so children could have a surprise on Christmas morning. Their work was supplemented by a benefit event at the Panida Theater that gathered not only toys but more than 100 quarts of fruit and vegetables. Others in the community donated food and various organizations, including the Elks Club, Rebekahs, American Legion Auxiliary, and Civic Club, put together baskets with fresh fruit, meat, and canned goods. More than 70 families received these welcome gifts.

A committee in Sandpoint gathered in late 1933 to make Christmas a bit more cheerful for those less fortunate. A local newspaper suggested the motto, “Give not from the top of your purse but from the bottom of your heart.” Once again the Panida Theater hosted a charity event, and organizers stressed the need for practical items like food and clothes. The Red Cross and the local relief association distributed these to local families.

This pattern of local assistance continued through the 1930s, with an annual benefit at the Panida collecting donations of food, clothing, and cash while local firemen gathered, repaired, and distributed toys to children. Officials assured the newspaper in December 1934 that “No one was forgotten.” This included the residents at the county poor farm in 1935 when local merchants donated nuts, fruit, candy, and cigars, “. . . everything for a fine Christmas” for the 26 men living there.

Year after difficult year in the Great Depression, local residents reached out to help their neighbors who had fallen on hard times. If they could do it, there’s no reason that we cannot carry on this worthy tradition. If you’re able, drop off a few items for the food bank or send a check to Toys for Tots. There are lots of other wonderful organizations, too, from Angels Over Sandpoint and Kinderhaven to the Sandpoint Senior Center. Let’s give “from the bottom of our hearts” to make this a “fine Christmas” for everyone. And remember — while toys are needed at Christmas time, food is needed all year round!

To donate, send checks to:

1 Response to A Little Extra Help for the Holiday Season